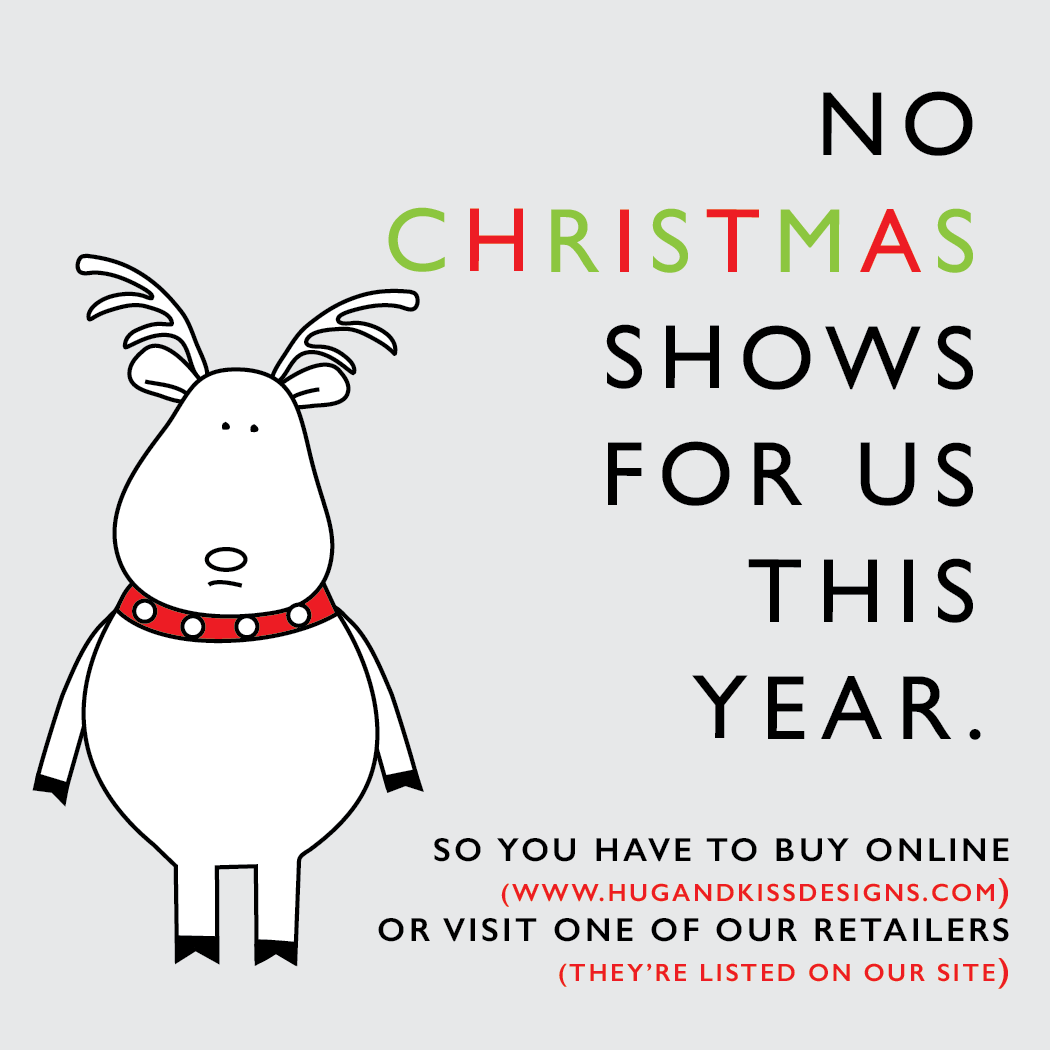 Hey everyone, Nikki here (ya know, the super awesome and talented designer/writer/manufacturer of all the products here on this site). I just wanted to take a quick second to update you all on my plans for this Christmas craft show season. I’M NOT DOING ANY SHOWS!  I know, I know… you were really looking forward to seeing me and spending a ridiculous amount of money on my cards!  Well, the good news is that you can find my cards in retail shops across Canada (use the Retailer link) OR you can buy online right here and right now spend as much money as you’d like!  There are over 60 different Christmas cards, a handful of Hanukkah cards, and over 70 Birthday cards (and various other cards and stationery items like our limited selection of calendars!) that you can buy 24 hours a day from the comfort of your own home (or office. I know 90% of you are probably at work right now).

So why the fuck am I skipping out on shows this year?  Cuz I need a goddamn break!

I founded this company back in January of 2007 (though it was really created in late 2006) and by the fall of 2007 I had entered the craft show scene with Portobello West.  I did that show for a number of years and slowly started adding other shows to my roster like Make It (Vancouver, Edmonton, Calgary) and the One of a Kind Show in Toronto (and for awhile Vancouver) and all sorts of other shows in between.  Every single year for the past 12 years I’ve been doing shows at Christmas!!!  The most memorable was November 2013 when I was 9 months pregnant and busy packing my crate to ship to Toronto for the One of a Kind Show.  Obviously I wasn’t able to do that show myself, so I hired some wonderful folks to work the 11-day show for me.  A few hours after the truck picked up my crate, I went into labour!  So while my staff were in Toronto setting up my booth, I was at home in B.C. with a 7-day-old baby!  Of course that didn’t excuse me from work… I still had daily check-ins. The only year I have not done a show at Christmas time was in 2014… you can blame my kid for that one.

Over the course of the last 12 years of shows, I’ve had some crazy shit happen while I’ve been away.  There was the year my grandma was on her death bed while I was in Toronto (you may have seen me crying in my booth that year).  There was the year my father-in-law was diagnosed with cancer (you may have seen me cry in my booth that year too).  The year I had bronchitis (you may have seen my cough my lungs up that year)…. Or how about the year I was recovering from a broken rib and almost didn’t make it to the show at all?  OR last year when I pulled my back setting up my booth and I could barely move? (Thank god for neighbours with drugs!) I won’t even get into the chaos that happened earlier this year during the By Hand Show in January and the One of a Kind Show in March… Let’s just say it was terrifying, but I’m still alive.

If you’ve read this far, then I think you can understand my need for a year off of holiday shows!  And you can’t be too mad at me, because you can find every card you could possibly want right here!

PS- Did you know that you can comment on my posts?  I just realized the other day that I’ve only ever had spam comments.  Someone wanna pop my comment cherry and help me test this feature out?

552
The President of Hug and Kiss Designs Inc.

Popping my first cherry. Can you pop your own cherry? If you can, you are my second. I love that you are taking a personal break. Work- life balance is key to work- life health!! Love your work.

Aww schucks, thanks for the pop! I’ve been adding more self care into my life (now that my daughter is in school!) and it’s been wonderful! I’ll get back to shows soon though! 😍

Hi Nikki, good on ya! Hells yeah you deserve a break! Enjoy your downtime and Merry Xmas!

Thanks! I’m looking forward to being around for all that holiday crap that I typically miss each year!

Good for you! I’m only doing 3 shows this year & none out of town. It feels sooo much less stressful. Maybe I’ll actually get the tree up before Christmas Eve this year!

I must say, it’s so nice not freaking out about all the show prep! Though I’ll be back at it in the spring I’m sure! Enjoy your show season Kris!

Shows are ridiculously stressful! I can’t believe you are from BC — I always see you at OOAK and just assumed… Refuel, relax and enjoy not setting up, tearing down & the travel! Happy Holidays!

They ARE ridiculously stressful! (But also so much fun!) Yep, I’m from BC… there are actually quite a few artists from BC that make the trek to Ontario for the show 🙂 We crazy like that!

Was just searching for you on the OOAK website, hoping to see you there today. When I didn’t see your booth pop up in the search, I came looking to find out why. I am sad I won’t get to have my usual laughs looking through your awesome cards, but totally appreciate that you are taking some time out to have a normal holiday season (is there such a thing?). Enjoy, and I will make sure to sit down and order some cards later today, when I need to put my feet up after a day of strolling around the Enercare Centre hall! Cheers!

Thanks Carolyn! I’m already enjoying the break from the madness! (though a part of me is sad to be missing out on the show as a shopper!).

I hope you enjoy the show! I look forward to your order 😉